Buildings are not just structures that people live and work in. They are pieces of art. Architects design and engineers build extraordinary art that defy gravity, incorporate extreme creativity, and turn heads. 10 of the most unusual buildings in the world include: The Fuji TV Headquarters building is one of the most unique buildings in the world. A large, 105-foot (32 m) silver sphere, weighing 1,200 tons, is featured on this metallic building. It was initially built on the ground and hoisted into position 403 feet (123 m) off the ground. It is used as an observation deck with views of the Odaiba area and Tokyo Bay.

Designed by Kenzo Tange, one of the weirdest buildings stands 25 floors and is untraditional in every sense of the word. The fully earthquake-proof building consists of two solid structures connected by a series of walkways and narrow towers. The unique architecture allows the building to fit right into the waterfront area where it is located.

The headquarters of Fuji TV is bustling with life. Still, there is always time for visitors here. Tourists can visit thematic exhibitions dedicated to the history of the TV channel and buy souvenirs related to Japanese television programs and the famous futuristic building in which they were created.

Standing at 623 feet, 190 meters, the Twisting Torso was completed in 2005. This is the tallest building in Northern Europe and one of the hallmarks of the city of Malmö, visible from almost anywhere in the city.

A sculpture inspired architect Santiago Calatrava who designed the most interesting building to look twisted like a rope. There are nine segments of pentagons that span five stories each, placed offset on top of each other to create a twisting effect. There are 54 stories in all. The segment on the top is set ninety degrees clockwise compared to the one on the bottom.

In addition to 147 apartments, this one of the most unique buildings in the world has a SPA salon, a cozy lobby with soft leather armchairs, a 24-hour concierge, and a wine cellar. In addition, 53 and 55 floors are occupied by conference rooms, a rooftop restaurant, and an art gallery. 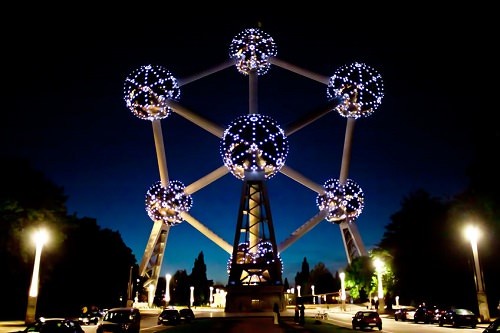 Originally built for the 1958 Brussels World Fair, the Atomium was designed by André Waterkeyn, an engineer, and André and Jean Polak, architects. The stainless steel building is 335 feet tall (102 m) and has nine spheres connected in the shape of an iron crystal unit cell.

Tubes connect the spheres along the dozen edges of the cube, as well as all eight vertices to the center. Escalators and elevators in the tubes connect five usable tubes, which are often occupied for public events. The four highest spheres are not safe and are therefore off limits to people.

The Atomium is one of the most unique buildings in the world that contains a museum, an observation deck, entertainment, and a restaurant. The panoramic restaurant Belgium Taste is in the uppermost sphere on level 8. Breathtaking views open from its windows. The remaining areas available to the public are given over to exhibitions. 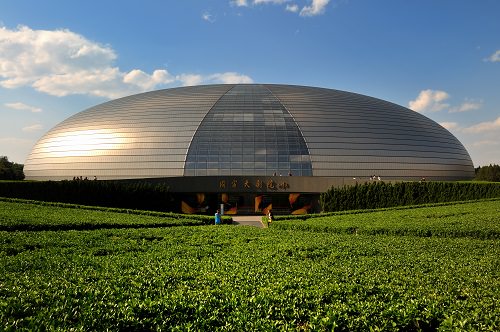 The National Center for the Performing Arts is also considered one of the most unique buildings in the world. Often referred to as “The Giant Egg,” this opera house seats 5,452 people in three separate halls. All halls have been carefully designed to integrate architecture and acoustics perfectly. A French designer, Pau Andreu, designed this one of the coolest buildings, which took six years to complete. The inaugural concert took place in 2007, six years after the start of construction.

The Giant Egg’s 151-foot (46 m) dome is 695 feet (212 m) from east to west and 472 feet (144 m) from north to south. In order to enter the building, audience members walk through a hallway that goes under the lake. This is done so that, having fallen underwater and passing through this gallery, a person gets rid of the burden of worries and plunges into the world of beauty.

In the halls of the National Center for Performing Arts, not only operas based on stories from the country’s history and contemporary works are staged, but masterpieces of world classics are also shown. 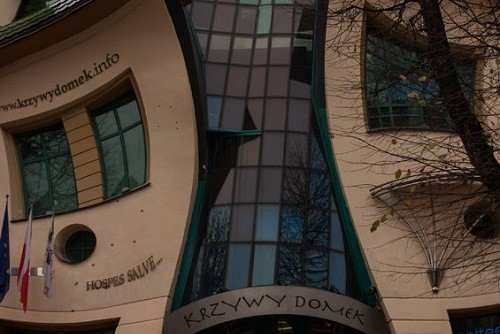 Built in 2004, one of the most unique buildings in the world, the Krzywy Domek is an irregularly shaped structure that is part of the Resident shopping mall. Szotynscy and Zaleski designed the interesting building, inspired by Jan Marcin’s fairytale drawings.

Everything is crooked in this house: windows, walls, roof, doors, and even cornices and drainpipes. The curvy lines give the crazy building a whimsical look. From the exterior, it seems there isn’t a single straight wall inside. Inside is a shopping center with shops, a restaurant, and coffee shops. There is also a Wall of Fame, a place where celebrities leave their autographs.

Despite the phantasmagoric style, one of the weirdest buildings, Krzywy Domek harmoniously blends into the surrounding architectural background with old toy houses and a leisurely resort atmosphere. Oscar Niemeyer designed this circular building that seems to be emerging from within the ground. According to Niemeyer, it emerges like a flower in the rock that holds it down. The double curvature building is set on a cliff, symbolizing a lighthouse built to overlook the bay.

This strange building is integrated with the art center. Therefore, it not only hosts exhibitions but also has an art school with studios. This theater simultaneously functions as a concert venue, a cinema hall, and a conference center, as well as halls for events such as workshops, seminars, and ceremonial lunches. On the upper level, you will find a rooftop terrace, restaurant, bar, and lounge with stunning views of the bay and Sugar Loaf.

In addition, you can walk around aimlessly in the largest public park in the city, Flamengo Park, where this interesting building is located. Today, the main attractions of the park, in addition to the Museum of Modern Art, are the Carmen Miranda Museum and the monument to those who died in World War II, three granite statues, an abstract metal sculpture, and a large wall mosaic. One of the tallest glass buildings in Abu Dhabi, the Capital Gate leans more than the Leaning Tower of Pisa. According to the Guinness Book of World Records, this architectural marvel is the “world’s furthest leaning man-made tower.” It leans 18 degrees, which is four times the one in Pisa. This magnificent and one of the most unique buildings in the world clearly shows that human possibilities are endless.

The interior of this one of the weirdest buildings is also very unusual. Behind its entrance doors is a beautiful conical atrium with a height of 60 meters. The lower 18 floors of the 35-storey building are occupied by office space, and the rest is one of the most expensive hotels in the world, Hyatt Capital Gate Abu Dhabi. There you can not only enjoy the highest level of service but also observe the fantastic beauty of the city and the Persian Gulf. 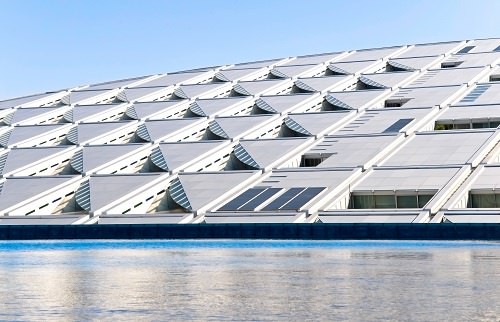 The designers mimicked the legendary ancient library that was built during the classical Greek era. The granite exterior walls are decorated with carved letters, pictograms, hieroglyphs, and symbols from 120 different human languages. Moreover, the reflection pools located around the perimeter of this one of the most unique buildings in the world provide visitors with an amazing sight.

In addition to the library, the institution also performs other cultural and educational functions. The main reading room is complemented by four specialized libraries. Moreover, there are four permanent museums, a planetarium, a conference center, several permanent and temporary exhibitions, and a computer science school. 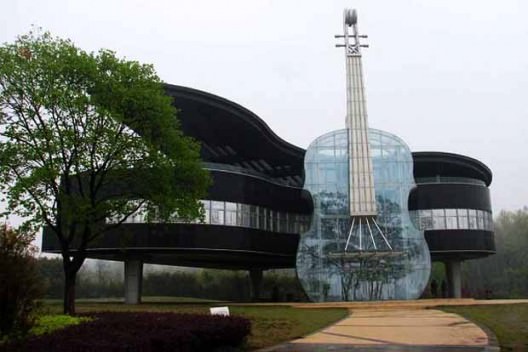 Shaped like a giant grand piano with a violin leaning against it, the Piano House in Anhui was built in 2007. Hefei University of Technology architectural students designed this interesting building. An unusual, eye-catching shape was given to the building in order to draw the attention of both tourists and Chinese residents to the developing region of the country.

The humongous glass violin houses the elevators that allow access to the piano, which is the actual building itself. Currently, this cool structure is used as a showroom for city planners.

Fully glazed with transparent and tinted glass facades provide maximum light inside the building. At night, this one of the most unique building is framed by illumination with neon tubes along the contour, which looks impressive and concise. 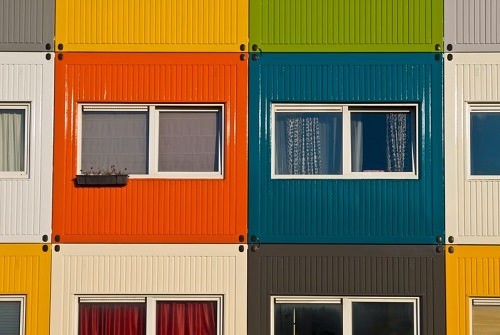 Urban Space Management Ltd created Container City, a residential system of reused shipping containers. The containers are linked together, creating high-strength modules that can be pieced together into engaging schools, offices, nurseries, residences, and sound studios, among others.

Such buildings are extremely popular not only because of their low price. They are also very convenient for the short or medium-term lease of land, after the expiration of which they can be easily dismantled and transported to another place or stored in storage. In addition, this low-cost method of reusing industrial materials is exceptionally environmentally friendly.

Although there are many additional, spectacular buildings in the world, these ten stand out to be some of the most innovative, artistic ones. They challenged architectural style and are often studied as exemplars of creative genius.

Below, we have compiled a list of the most exciting questions about the most unusual buildings in the world:

What is the most unique building in the world?

The Guggenheim Museum in Spain is a unique building in the whole world. The museum building resembles either a huge cruise ship or a spaceship with aliens. You will not find a single right angle in the building. The Guggenheim Museum has a lot of video art, installations, and interactive works of art. Before entering the museum, visitors are greeted by two unusual exhibits – a giant steel spider and a huge figure of a puppy made of flowers.

What is the most complicated building in the world?

What is the most beautiful building in the world?

Lotus Temple in India is the most beautiful building in the world. The beauty and proportion of the Lotus Temple in India lie in its proportions and symbolism of form. The outer outlines do not contain any straight lines or angles. Instead, they flow smoothly along the curves of closed and half-open petals. Around the perimeter, the temple is surrounded by nine petal pools with turquoise water. Looking at the Lotus temple, it seems this beautiful flower is about to bloom. This is a real masterpiece of architecture.
Share on Facebook Share on Twitter
Tags: unusual buildings