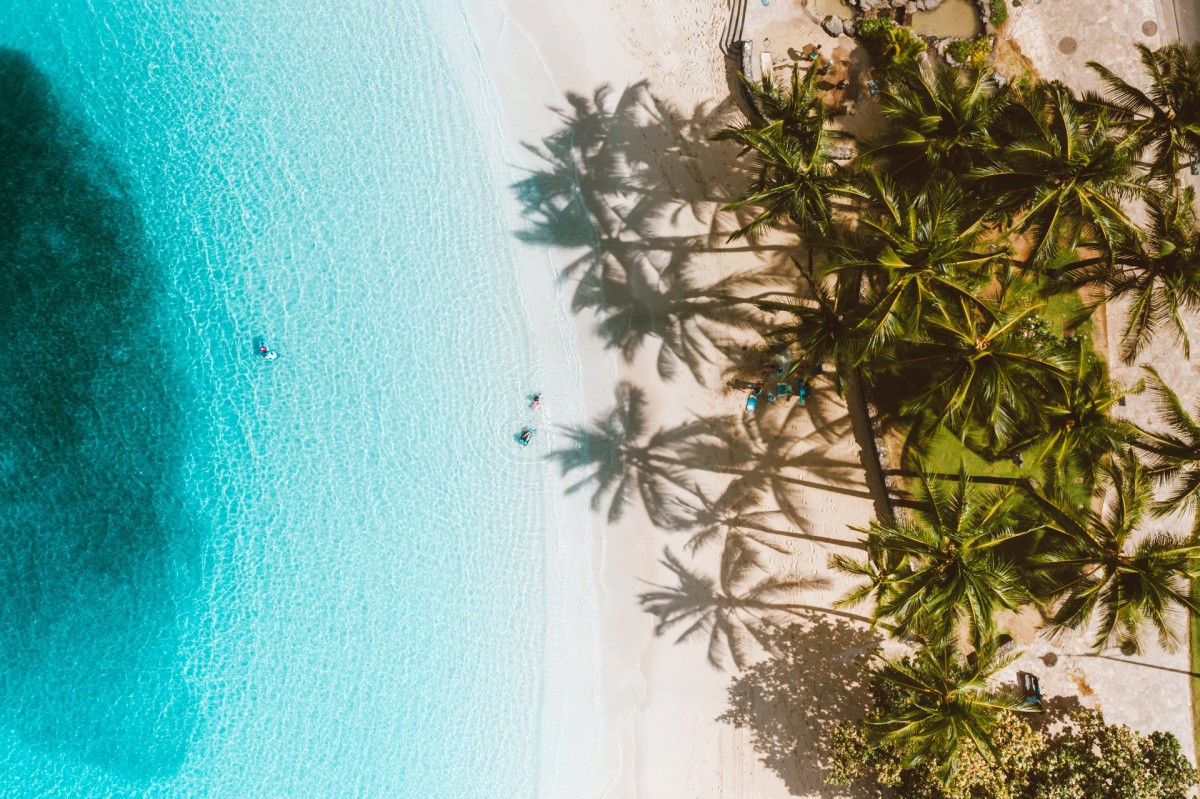 For a group of small, closely spaced islands, Hawaii’s beaches come in a great range of possibilities. Hawaii has more than just beaches of every type of sand imaginable, waters of every shade and waves as gentle or as powerful as you would want them. Large areas of Hawaii’s beaches are untouched by development, too. If you’re looking for the most special of Hawaii’s beaches, this list has the most important ones. 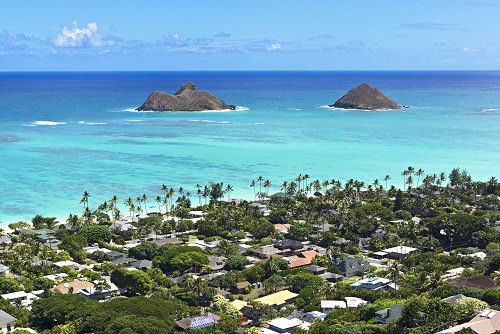 Lanikai is a seashore in the northeast of Oahu, Hawaii. With its sheltered waters, the waves at Lanikai are far quieter than elsewhere in Hawaii. Clear waters, dense foliage, and wide, powdered sugar sands make Lanikai one of the top spots in all of Hawaii for swimming. The beach has been often ranked among the world’s best beaches to visit.

Lanikai is overcrowded on weekends, especially during the winter and summer seasons, so if you are planning to visit the beach, do it during the weekdays. Since Lanikai Beach has the two islands in the background – the Na Mokulua – it’s a perfect place for photographers.

Firstly, you should fly to Honolulu airport (HNL). And then getting to the destination by bus is the most common. 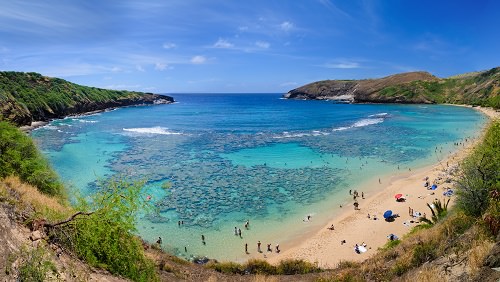 Hanauma world is a famous beach in the USA, Oahu. It is a pretty, nearly enclosed bay home to a great diversity of marine life. Its beauty is so well-known that it has attracted thousands of visitors yearly, an onrush that has placed its marine life at risk.

The beach itself is a tropical paradise. Here and white sand and many exotic plants. The water here is very clean, and the scenery is such that you can “lose your head.” For its beauty, the beach was included in the list of the best beaches in Oceania at the beginning of the 21st century.

Therefore, it is not surprising that the flow of tourists per year is approximately one million. Among them are nature lovers, lovers of passive beach recreation, and those who are engaged in snorkeling and diving. Strict visitor limits have been put in place since 1990 to protect the beach. If you’re interested in exploring the sea life of Hanauma, you need to arrive early.

To get to the beach, you need to fly into Honolulu International Airport. Then take a taxi or bus to Hanauma Bay. For those who like challenging wave actions, the beaches of North Shore offer muscular action.

The 7-mile beach with its 30-foot waves is home to the Vans Triple Crown of Surfing, beginning November each year. The North Shore hosts many surf competitions during the winter months as the pros battle it out on some of the best waves on Earth, while the summer months are ideal for snorkeling and diving.

You are welcome to take a bus № 52 or 55. It would take about 1.5-2 hours. For an active tour, consider the North Shore Surf Bus, which departs from Waikiki. 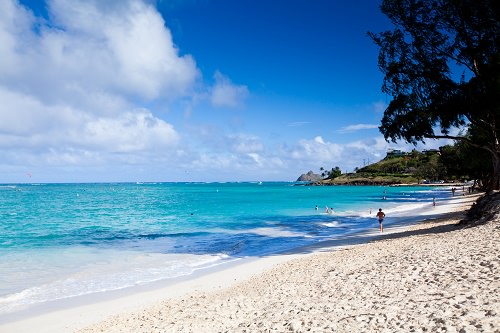 Kailua Beach Park is one of the largest and most beautiful beach parks on the windward side of Oahu. It offers picnic tables, volleyball courts, barbecue areas, picnic shelters, showers, restrooms, plenty of shade, white sand seashores, a quiet area for swimming, lifeguards, and stunning views.

For kite-surfers, wind-surfers, kayakers and swimmers, the windy stretch of Kailua Beach Park is the perfect spot to hit. With ocean sporting equipment rentals conveniently close by, the beach attracts vast throngs of visitors over the weekends. Kailua is also popular among romantic couples looking for perfect little beach weddings.

Commercial landings are not allowed here, so the only ways to get to the destination are by city bus, car rental, or booking a tour. 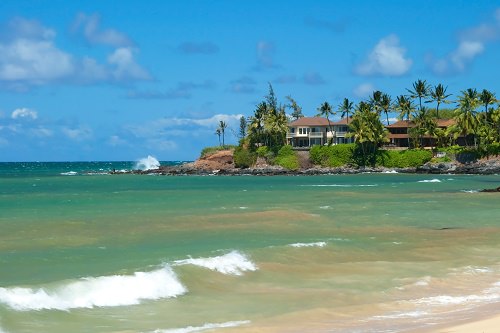 The Hamoa beach is right behind the Travaasa Hana hotel and is maintained by it. The beach is frequented by body boarders and body surfers in winter. In summer, swimmers come in for its unique salt-and-pepper sands. The waters of this beach have a strong undertow, though.

Swimming on Hamoa Beach is not recommended even during the summer due to strong currents, but snorkeling is possible to the left of the bay. In winter, you can come and see the surfers in action or try to stand on the board yourself. However, here it is best to take private lessons in this activity.

Fly to Honolulu international airport (HNL), then Maui – Kahului Airport (OGG). Then, you should get a taxi. Parking is possible only on the edge of the road at the top of the hill, from where you have to go down much. 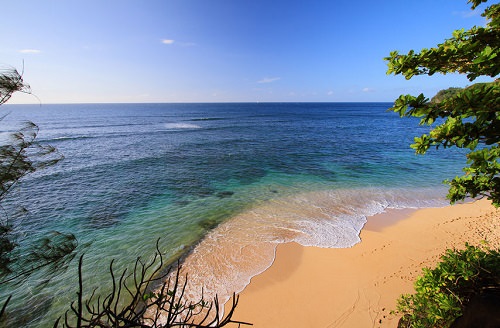 For stunning visual beauty, the beaches of Hanalei Bay feature at the top of any list of beaches in Hawaii. The beautiful semi-circle of Hanalei Bay on the North Shore of Kauai would be perfect even if its pure, white sand beaches were all it had. Its stunning backdrop of emerald mountains and crystal waterfalls make the beach ethereal in its beauty.

The surroundings of the beach are very picturesque. You can meet wild goats and buffaloes in the mountains and admire beautiful waterfalls and mysterious caves. Before the sunset, head to the pier and look out over the Pacific Ocean – when the multicolored sky starts to glow, you will feel like you have truly stepped into some fantasy world.

Hanalei Bay has every kind of water sport imaginable, too. During the winter, it attracts a crowd of surfers, while the summer months in calm waters attract those who want to enjoy a relaxing swim.

After arriving in Hanalei, you can take a taxi to the beach.

More: 11 Most Beautiful Beaches Worth Visiting 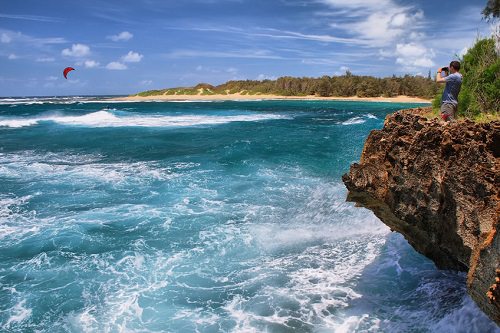 Poipu has a quality that isn’t often seen in beaches on Hawaii – its shallow waters are quiet enough for even children and learner swimmers. The shores of Poipu Beach are extraordinary white sandy crescents, enveloping the turquoise ocean waters.

Poipu is incredibly popular among tourists. It was once ranked by Travel Channel the best beach in all of America. The golden sands and enticing waves of Poipu Beach attract surfers from all over the world who flock here from all over the globe.

This is a great place to spot the endangered Hawaiian monk seal (only 1,200 creatures left), who also enjoy finding their perfect spot on the shoreline to soak up the sun’s rays as well as enjoy all kinds of water sports.

The most common way to get there is by rental car from Honolulu. 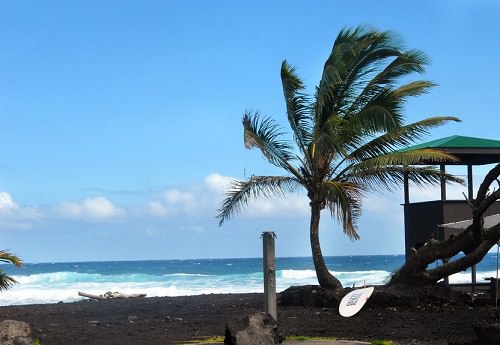 Bordered by lush green forests, Punalu’u, on the Big Island, is most famous for its black sand beaches. Such an unusual color is the merit of local volcanoes, spewing lava that enters the ocean waters and splashes onto the shore as basalt chips.

You can walk along the beach, and sunbathe. Punalu’u is excellent for experienced swimming and snorkeling, too. Since the swimming area is rocky, this beach isn’t recommended for new swimmers.

For nature lovers, it’s an excellent place to spot turtles as they come in to nest. Often on Punalu Beach you can find the Green Turtle resting here, which is on the verge of extinction. Remember turtles should not be approached or touched.

This is a unique place to enjoy the beauty and natural scenery, as well as a fantastic opportunity to see and observe the life of large tortoises at arm’s length.

Fly to Honolulu international airport (HNL), then Maui airport – Kahului (OGG). There is no parking near Papalaua beach since the beach itself is parking. Therefore, this is one of the few places on the island of Maui where you can park your car right next to the sea and even in the shade of trees. 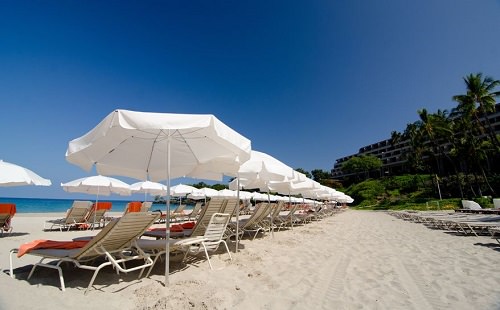 Kauna’oa is a picturesque beach in the prestigious eco-resort of Mauna Kea at the foot of an inactive volcano. It boasts a rich history and friendly people. Since 1960, since the opening of the Rockefeller hotel here, the coast has become a place on the Big Island for celebrities seeking to find the coveted solitude in the pristine paradise of Hawaiian nature.

Kaunaoa is considered one of Hawaii’s most beautiful white sand beaches and one of the five most scenic in the United States. The fine, snow-white sand, which covers the entire long coast, gives it an idyllic look against the backdrop of impeccably turquoise calm waters of the ocean and framed by emerald palm trees and other vegetation on the coast.

Now it is a popular beach for couples, divers, and connoisseurs of eco-recreation with the opportunity to watch sea turtles and stingrays.

This isn’t contradictory – Kauna’oa has a crowd control policy, unlike other beaches. No more than 25 people are allowed on the beach at any time. To get in, it’s best to arrive early. The Mauna Kea Beach Hotel is a great, historic hotel to stay at.

The most convenient way to get to Kaunaoa beach is by car rental at Kona Airport. 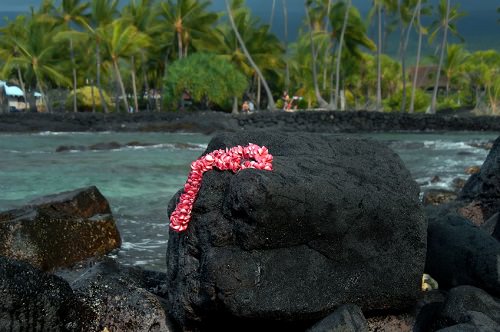 Some of the most breathtaking beauty in Hawaii is found underwater, right off its beaches. Pure satin sand under the shade of classic palm trees attracts seashore lovers.

With hundreds of colorful, native species of sea life, snorkeling, scuba diving, and reef diving are popular activities. Honaunau beach was once named the best beach in America, and it’s no wonder why.

This beach is also suitable for families with children, as the water is calm near the beach, which makes it safe. However, children can only have fun here by swimming, as there is no other organized children’s entertainment.

It can be reached by driving along Highway 11 south of Kona. The road runs along the sea, so it is difficult to get lost.

Which island in Hawaii has the best beaches?

Oahu island has the best beaches in Hawaii. You are welcome to visit these world-famous beaches for a wide range of activities, then head to secluded, pristine beaches with waterfalls, magnificent vegetation, and mountain trails.

Where are the black sand beaches in Hawaii?

There are several black sand beaches in Hawaii. But the vast majority of them are not suitable for tourist visits and swimming due to a large number of rocks and stones with sharp edges. It’s not safe to walk there. Punaluu is considered the most famous black beach in Hawaii. It is located in the southern part of the largest island of Hawaii in the archipelago – on the territory of the Hawai’i Volcanoes National Park.

How many beaches are there in Hawaii?

The Hawaiian archipelago consists of 162 islands. However, only seven are inhabited.

While this selection tries to touch upon the most spectacular of Hawaii’s beaches, it can pay off to do some exploring of your own. There’s much more to the beauty of Hawaii than its most well-loved beaches. What beaches are on your travel bucket list? 27 Most Beautiful Beaches Worth Visiting 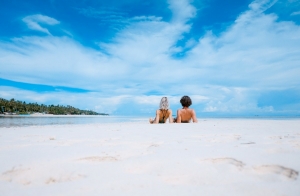 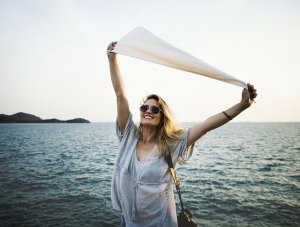 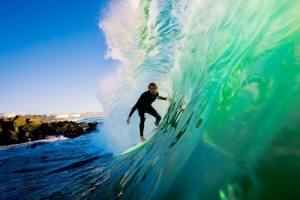 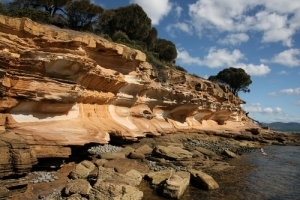 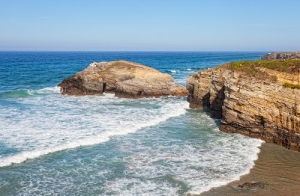