Firenados are scary, dangerous, and even mysterious at times. The whirling flames can destroy the entire city in a matter of a few hours. While tornados are dangerous, firenados cause more harm because volatile embers can be quickly distributed long distances, causing new fires and whirling flames. Firenadoes typically move slower than tornados, but they cause strong fire winds that are very hard to extinguish. Here are some of the most dangerous firenados ever. 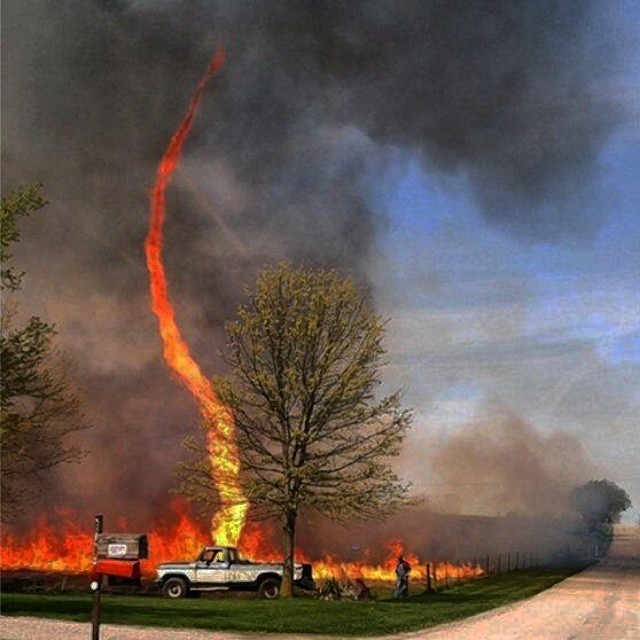 This photo of a firenado was caught by Janae Copelin in Missouri. Despite thick clouds of bluish smoke and an eerie roaring sound, she dared to stop near the field and photograph the frightening firenado. According to a resident of the city of Chillicothe, it was the most terrible thing she had ever seen and looked like an image of hell.

Even though it was not a natural disaster, the firenado looks really dangerous. In reality, this swirling funnel of debris, gas, and smoke occurred when a farmer was burning the field.

Locals witnessed an incredible natural phenomenon: a firenado that arose due to hot air turbulence. The wildfire in California turned into a real hell.

One hundred twenty-five thousand people were evacuated, and at least 22 buildings were destroyed. This firenado was not just scary. It killed many animals and destroyed everything on its way.

In a video recorded by a firefighter, a fire tornado is seen developing in the northeast of Portugal, in the Alván Natural Park, in Vila Real.

Strong wind and a fire on a field of several hectares caused a fire tornado. The funnel moved down the slope, burning everything in its path. The reason for the fires in Portugal is the heat and dry weather.

In the video footage published online, you can see giant flames curl up into a spiral and rise in one column above the ground.

60 hectares of forest burned down. A helicopter had to be called to extinguish the fire, which dropped tons of water. Two hundred rescuers worked for several hours to put out the California fire tornado. This extremely dangerous natural phenomenon happened in San Diego, California. As a result of a fire tornado in California, dozens of houses caught fire, and a strong wind raised the flames.

Firefighters could not start extinguishing the fire for a long time due to strong gusts of wind, which spread the flames to nearby areas. Visibility was also hampered by wind-blown ash and dust. Thousands of people were urgently evacuated from their homes because of the fire tornado in California.

Brazil has some firenados too. For example, a drought that caused severe fires and dry wind caused a firenado in the Brazilian municipality of Aracatuba.

This one does not look as dangerous as the previous ones, but still, it could destroy everything nearby. Dozens of motorists have witnessed how a whirlwind of flame several meters high swept through the fields along one of the roads. Smoke from the fire obstructed traffic. As a result, a multi-kilometer traffic jam arose on the highway.

A fire tornado in Australia is a rather rare phenomenon, despite the frequent fires that cover its territory during the summer drought.

However, this firenado video shows how exactly a firenado occurs. It was recorded on September 11, 2012, by Chris Tangey. This big fire tornado happened near the city of Alice Springs, in the central part of the continent. The tornado fire rose to 30 meters and raged for about 40 minutes.

It was probably hard to film it. It is heartbreaking when you can’t prevent a disaster, and how to survive a firenado is even scarier. A wind-blown wildfire tore its way through sage and pine trees near Idaho’s Sun Valley mountain resort. This is one of the most dangerous firenados ever that over 600 state and federal firefighters were trying to control and extinguish. It caused the evacuation of 1,600 homes.

A rare wildfire suddenly appeared in Brazil on farm plots in Santa Helena de Goias. Its height was more than a dozen meters.

The firenado formed when farmers were clearing land for their land with fires. Suddenly, a flaming whirlwind appeared from the fire and began to move around the agricultural area.

On this day, there was windy weather and dry air, which contributed to the strengthening of the unusual element.

A massive bushfire in southern Australia has created ideal conditions for a fire tornado.

The flames of a forest fire burst into the air, and the burning whirlwind was supported by fire, smoke, and stormy wind. The fire engulfed a pine plantation, destroyed more than 3,000 hectares of land, and destroyed two houses.

In most cases, firenados last only a few moments, so it is not easy to catch them on camera. It was not easy to find true firenados, but hopefully, now you know how dangerous firenados are and what they look like. Have you ever witnessed a firenado?

What is a fire tornado?

A fire tornado is an anomaly when the wind suddenly changes direction during a fire. As a result, the temperature inside the funnel is enormous.

These are fiery fire tornadoes that can occur naturally. They usually occur during a large-scale forest fire. For its formation, it is necessary to have several intense fires close to each other and a very strong headwind. The air above the fire sources becomes hot and lighter and rises accordingly. Air flows begin to twist. Cold air enriched with oxygen is captured from below.

A fire tornado is a vertical whirlpool of fire in the air. Moreover, it can circle, both separately from the flame on the ground and inside the territory where the fire broke out.

These phenomena are typically 10 to 50 meters high and several meters wide. But sometimes nature creates monsters a kilometer high. The speed of rotation of the air inside the fire tornado reaches incredible rates – above 400 km/h. It only lasts a few minutes.