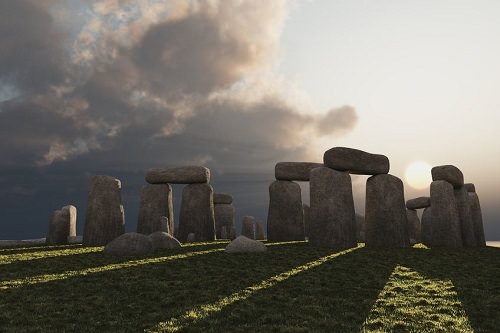 Honoring the Winter Solstice is an ancient tradition, perhaps the oldest one humans have. For the people who lived thousands of years ago in Britain, it was a celebration of the return of light after months of darkness. Occurring in deep midwinter, on the shortest day and longest night of the year, the solstice was seen as the harbinger of renewal and hope. It was a spiritual experience. With extraordinary intention these people built massive and mysterious structures in which passageways allowed the light from the sun to enter exactly on the solstice. How they did this is well-known today, and the ritual comes to us across nearly six millennia.
Most people have heard of or visited Stonehenge, a 5,000-year-old massive circle of stones set on Salisbury Plain in Wiltshire, England. The site has inspired legends and folklore for centuries. No one yet can fathom how the builders raised the giant sarsen pillars or placed the lintels above them. We don’t really have any knowledge of the purpose of Stonehenge, though some feel convinced astronomy played a role, or the cycle of seasons and crops, but still, there is no way to know. Many others claim the intention of the circle had a spiritual meaning.

It has been determined that the smaller stones that create the inner ring were taken from the Preseli Mountains in Wales, over 200 miles away. There are those who say the Preseli Bluestone has a shamanic energy drawn from the Merlin of ancient legends!

Stonehenge is carefully aligned on a sight-line that points to the winter solstice sunset. The sun’s rays align with two significant stones: the central Altar stone and the Slaughter stone.

Still, visitors from around the world will gather at Stonehenge early in the morning of December 22, 2014, to mark the Winter Solstice. The reason is that in 2014 sunrise is celebrated just after 8 a.m. on December 22. Why not the 21st? This is unique to Stonehenge because the celebration at Stonehenge is not fixed to a specific calendar date but aligned with the solar year. (It also might be because sunset can be very cold out on the windswept plain…) After many decades of restoration, in which the fallen stones were reinserted into their assigned slots in the ground, Stonehenge was brought into the true state it had millennia ago.

Many sites like these three megaliths were built around the same time in other parts of the world. They all contain in their shape and solidity an identity and affirmation for the people who created them. For us, making a connection with our ancient past is, in a way, making a connection with ourselves. The people who lived thousands of years before us show an attention and caring and reverence for things we also understand in much the same way. For us, too, the entrance into the dark of winter is a rite of passage, and our relief at seeing the days grow longer is a kind of faith in the journey of life restored.

What does midwinter mean to you? Does the symbol of the Winter Solstice hold mystery and enchantment for you? Do you feel that the ritual of honoring the passage from dark into light is a way for us to allow the rhythms of life to guide us, to ground us in the vitality of who we are?

10 Fantastic Things to Do in Cuba

10 Most Beautiful Places in China